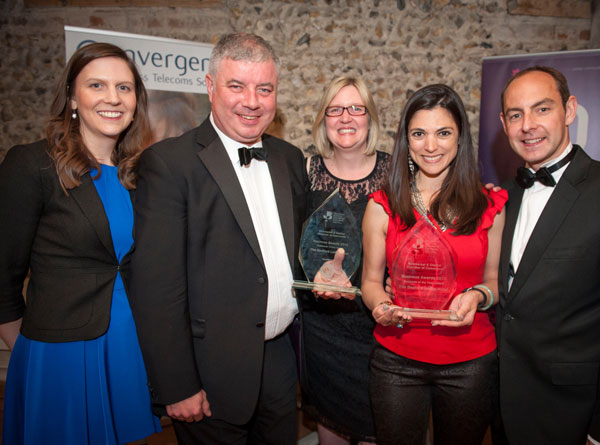 They’ve done it! Hardworking staff at Newmarket’s luxury four-star Bedford Lodge Hotel & Spa have pulled off a major coup by winning two awards in the Newmarket and District Chamber of Commerce business awards.

Their efforts meant they took home the Customer Focus Award and, the jewel in the crown, Business of the Year Award 2015.

They represent more feathers in the cap for the hotel, which will soon celebrate the anniversary of being upgraded from four black AA stars to four red ones.

Mr Noel Byrne, Chief Executive of the 77-bed Bury Road hotel said: “To win one award would have been a big reward, but to win two, and ‘Business of the year’ at that has made us all very happy.

“We have a great team here who take a lot of pride in their work, and our regular favourable testimonials to that effect bear this out. Our operation here really is a joint effort, so I believe everyone here is a winner.”

The judges said the hotel’s entry for the ‘Customer Focus award’, sponsored by The Guineas Centre, was “by far the best entry of this group”.

In judging ‘Business of the year’ award they described the hotel as a “quality enterprise”. In the past few years the hotel has benefited from a £12m investment including a luxury onsite £5.5m Spa.

The judges were impressed by the recent solid investment shown by the owners into the hotel’s new luxury spa, additional bedrooms, refurbishment of the conference facilities and their health and fitness club.

The hotel is situated just a short distance from the town’s famous paddocks and training stables. It is set in three acres of secluded rose gardens, and is a favourite for bridal parties as it is licensed for weddings.