Aspiring cooks taking part in the Great Mildenhall Bake Off have been given some culinary tips by Bedford Lodge Hotel & Spa’s top chef James Fairchild.

The executive chef at the award-winning Squires restaurant at Newmarket’s only four-star hotel, is one of a panel of three judges at the charity bake off.

It’s an event being staged by the Mildenhall Lions club and takes place on Saturday 7 June at the Jubilee Centre to raise money for Ovacome, the ovarian cancer support network.

And while he’s at pains not to say what his preferences are he was happy to share some trade secrets to aspiring chefs. 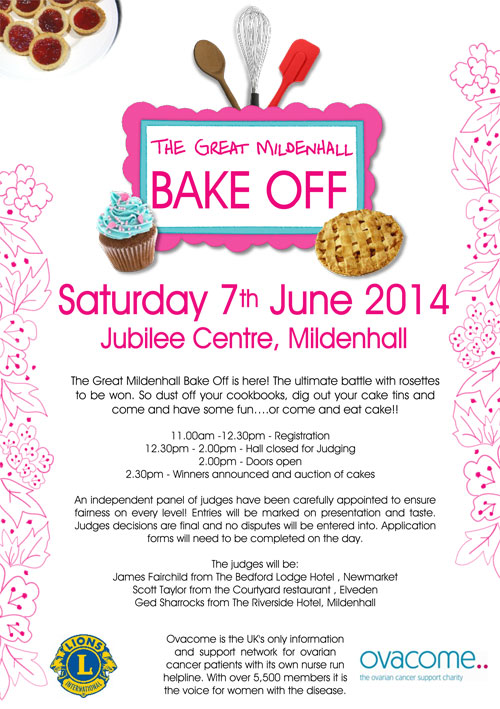 Kirsti Fox, secretary of the Mildenhall Lions, said: “This is the first time we’ve staged the event so we’ve no idea how many people will attend but it is for the whole community to enter. “We have had a lot of interest and we have a Facebook page now, too, so keep an eye on that.”

The other judges are Scott Taylor from The Courtyard restaurant, Elveden, and Ged Sharrocks of The Riverside House Hotel, Mildenhall.

It is £5 to enter one category but you can enter multiple categories. Check out The Great Mildenhall Bake Off on Facebook for category details or call Kirsti Fox on 07900 498916.

The Bedford Lodge Hotel & Spa has 77 stylish guest rooms, is set in three acres of secluded rose gardens and recently opened a new £5.5m Spa. It is just a short distance from Newmarket’s famous paddocks and training stables.