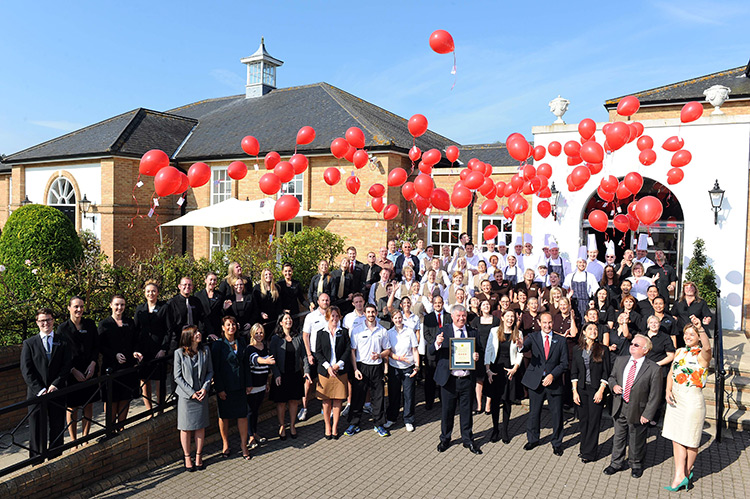 One of the highest accolades in the hospitality industry has been bestowed on the Bedford Lodge Hotel & Spa in Newmarket, Suffolk.

The AA has upgraded the hotel from 4 Black Stars to 4 Red Stars in recognition of its excellent quality service and standards across all areas of the business.

It is one of only a handful of hotels in East Anglia to have been given 4 Red Stars and there are a total of only 67 hotels in the whole of the UK to be awarded the exclusive accolade.

The prestigious award was presented to Noel Byrne, chief executive of the hotel and spa, at a ceremony in London on 22nd September.

Mr Byrne said: “This is an amazing achievement for our team who are focused on delivering exceptional customer service to all our guests. The 4 AA Red Stars is something that everyone at Bedford Lodge Hotel & Spa has been working towards and it is a privilege to accept this award on their behalf.”

The AA’s Head of Hotel Services Manager, Simon Numphud, who manages the hotel inspection process, said: “Red stars, as opposed to black stars, indicate hotels which represent the most outstanding examples in each star category.

“The criteria for AA Red Stars are consistent excellence in all areas of a hotel’s operation, and Bedford Lodge Hotel & Spa joins an elite group of top performers within the hotel industry. It is encouraging to see there are still hotels pushing the boundaries and striving for high standards and excellent quality.”

To celebrate, the hotel has released 100 biodegradable balloons with prizes attached to each of them to whoever finds them. Prizes include overnight stays, Champagne spa days for two, spa treatments and ten Sunday lunches.

Melissa Pantano-Gaus, marketing co-ordinator at Bedford Lodge Hotel & Spa, said: “We wanted to do something to celebrate this fantastic award with our neighbours. Hopefully 100 of them will find the balloons and will come to visit to enjoy the prizes. In some releases balloons have been known to travel over 1000 miles, so perhaps it may mean we get to celebrate with some more international guests as well.”

Rachel Hood, the Mayor of Newmarket, said: “This is an outstanding achievement by Bedford Lodge & Spa, as well as for the town of Newmarket. Newmarket is further establishing itself as an elite destination in the East of England for UK and international tourists and we are hugely proud of this wonderful accomplishment.”

The 77-bed hotel has benefited from £12 million investment over the past three years including additional bedrooms, refurbished facilities and a new £5 million luxury spa. It also houses a 2AA Rosette Restaurant, Squires.

The independently owned hotel is set in three acres of beautiful rose gardens and has conference and banqueting facilities for up to 180 delegates; it is a much sought after venue for business, leisure and wedding guests, as well as visitors to Newmarket racecourse and Cambridge.

Keith Brown, Chief Executive of Visit East Anglia said: “We are thrilled that the Bedford Lodge has been acknowledged as one the country’s finest four-star hotels. To have a hotel and spa of such quality in Suffolk and East Anglia is great news for our visitors as well as for Newmarket itself.”

The AA has been recommending hotels since 1908, but in 1912 adopted a more critical approach to the hotels listed in its handbook. The AA’s then Secretary, Stenson Cooke, had once been a wine and spirits salesman and felt that the star rating of brandy would be familiar yardstick to apply to hotels. From then on the AA star rating for hotels was born. Establishments are awarded between one and five stars depending on set criteria following an overnight visit from an AA Hotel Inspector.

Picture: Staff at the Bedford Lodge Hotel & Spa celebrate the new accolade with a balloon release