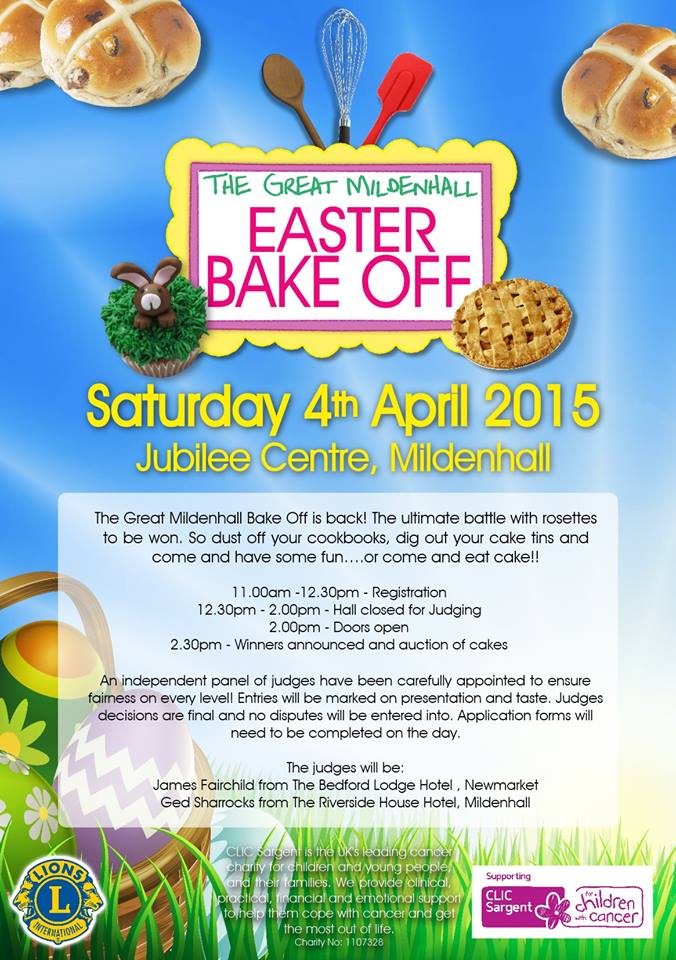 Bedford Lodge Hotel & Spa chef James Fairchild is urging aspiring cooks to put on a pinny and enter into the Great Mildenhall Easter Bake Off for charity.

The Executive Chef of the award-winning Squires restaurant in Newmarket’s only four-star hotel is one of the judges for the second-year running at the Mildenhall Lions Club’s event.

This year it is being staged on Saturday 4 April at Mildenhall’s Jubilee Centre in aid of CLIC Sargent for Children’s Cancer and Mildenhall and District Lion’s chosen charities.

James said: “The amount of effort that went into last year’s bake off was phenomenal; the children’s section took me by surprise.

“The thought, flavours and technical skill put into the cakes was outstanding, but there were three cakes that stood out the most for me: bumble bee cupcakes, which had a hint of honey in them, the wishing well, which was full of Smarties; and cupcakes with drinking straws in them, which when you drank from them had peach puree inside.

“I’m looking forward to seeing great things again this year, especially if the entries from last year are anything to go by.

“Even if you entered last year it’s worth doing it again. The Bake Off raised £11,000 in Suffolk alone for Ovacome, the ovarian cancer support network.”

James said his father died of cancer some 11 years ago and he said: “Cancer charities are close to my heart. So judging the Bake Off is the least I can do to support a great cause.”

The other judge taking part is Ged Sharrocks of The Riverside House Hotel, Mildenhall.

Kirsti Fox, secretary of the Mildenhall Lions, said: “We are so pleased to be hosting another Bake Off due to the success of last year. It really is great to see all the community getting involved and we hope this year, with the new categories and the cooking demonstrations that have taken place in the schools, we will see more entries.”

For more details about taking part visit The Great Mildenhall Bake Off Facebook page. It is £5 to enter one category but you can enter multiple categories for less. Children 12 and under entries are £1.