One of our personal trainers has beaten 2,500 others around the country to be crowned Personal Trainer of the Year! Jay Banks was given the title at the international fitness convention held in Blackpool.

Jay runs personal training sessions at The Edge Health & Fitness Club, alongside his own studio in Cambridge.

He said: “I came runner up in the competition last year so I am absolutely made up to be the winner this year.

“It was announced during a showcase at the event and it was amazing. I am so proud and honoured to win the award – just chuffed to bits.” 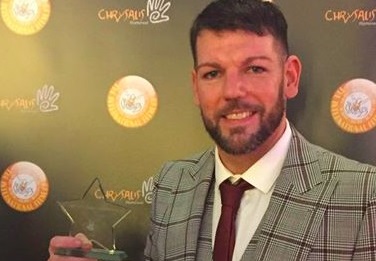 Jay had to fill out an application form with testimonials and results from clients in the area.This went in front of top trainers from Virgin Active in South Africa, alongside 2,500 others, to see Jay come out on top.

Jay became a personal trainer after he suffered an “horrific” injury during his career as a professional dancer. He fell off the stage and broke his ribs, puncturing a lung. It was then he realised he would not be able to dance again and retrained as a personal trainer.

We couldn’t be prouder of Jay and he is a credit to the The Edge Health & Fitness Club.