Today was a very exciting morning at Bedford Lodge Hotel & Spa. Staff gathered outside the front entrance of the Hotel on Bury Road to wait for Richard Farquhar and his huge entourage of friends, family, trainers and their horsey companions! Richard was completing the final leg of his amazing journey all in aid of Racing Welfare and Pancreatic Cancer UK. 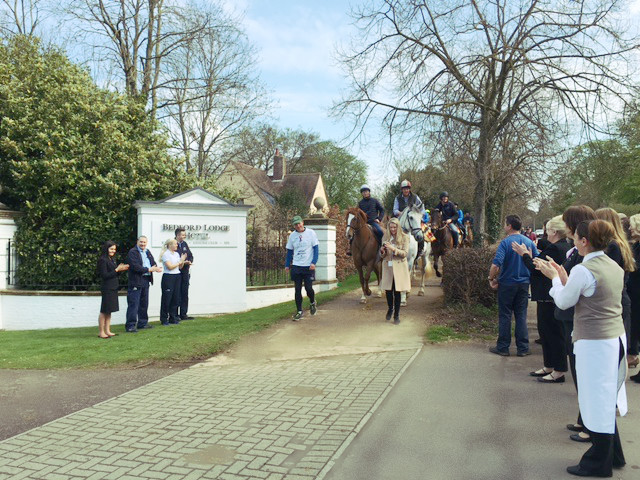 In 2015, 60 racecourses across mainland Britain will stage race meetings. Over the course of thirteen months, from March 2015 to April 2016, Richard Farquhar will walk across the nation, connecting all 60 of them in what will end up as a single, unbroken chain. From Newton Abbot in the South to Perth in the North, Yarmouth in the East to Ffos-Las in the West, Richard will leave very few parts of the country untouched. The journey will take him through countless cities, towns and villages, giving people all over the UK the chance to get involved in ‘Walking The Courses’, a truly unique charity campaign.

Each leg of ‘Walking The Courses’ will end with Richard’s arrival at a racecourse on the day that there is a race meeting, adding an exciting feature to each of these race days. Richard’s journey does not finish at the moment he reaches the gates of the racecourse, however. On the contrary, he will, quite literally, be walking the courses, ending each leg with a lap of the racetrack itself, finishing at the winning post. Richard hopes that trainers, jockeys and other interested individuals will join him on this lap of the track, to encourage him through the last few furlongs.

The combined distance that Richard will cover during ‘Walking The Courses’ will be approximately 3,000 miles.

The journey begins on the 20th March 2015 at Newmarket, the home of racing. Richard will walk to Towcester Racecourse, arriving about seventy miles later at the meeting on the 23rd March. On the 1st April, Richard will head north and set out from Perth racecourse to Musselburgh racecourse, completing a northern leg of the journey. Thirteen months later and no doubt a stone or more lighter, Richard will find himself back at Newmarket Racecourse, having filled in all of the legs of his immense journey. Walking The Courses will conclude at the Craven Meeting, a meeting that Richard attended for 26 consecutive years with his father, to whose memory ‘Walking The Courses’ is dedicated: a fitting meeting at which to finish this brave undertaking.

So far Richard has raised over £330,000 which is an astonishing amount of money!